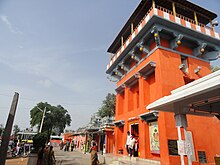 The temple was built in 11th century A.D (approximately 1143)( about 860 years old) under the Kakatiya dynasty. Located at Karmanghat, closer to Sagar Road. The god here is very famous and powerful. People visit from different locations to worship hanuman here.

Hyderabad has many tourist attractions and holy temples in and around the city. A temple which stands out in the state capital, almost 8 ½ centuries old – The Karmanghat Hanuman temple. It is one of the oldest Hanuman temples in the state. Situated in the Saroornagar mandal of the Ranga Reddy district, this temple has been attracting thousands of devotees every day. It was built by the Kakatiya king Prataprudra II in 1143 A.D.

The word "Karmanghat" itself has a beautiful story behind it and shows that Lord Hanuman exists in this temple. In the 17th century, after conquering Golconda Aurangzeb sent his men to destroy the Hanuman temple. When they tried to enter the temple, they were pushed back by some strong force and could not enter. When they reported the matter to Aurangzeb, he himself came down to destroy this temple. He too could not enter the temple and he heard voices which said "If you want to enter this temple, make your heart stronger(Karo-man-ghat)". Aurangzeb asked the voice to prove its truthfulness. Then there were lights all around, and there appeared the form of the lord. This is how the place came to be called as Karmanghat.

Once when the Kakatiya king Prataprudra II went for hunting, he became tired and came to a place called Lakshmipuram. He heard the roar of a tiger and thought of hunting it down. But he could not find the tiger and sat down again. He heard the roar again and went in that direction. After sometime, he heard the name "Sri Ram" being chanted. He threw his weapons and went in that direction. He cut down all the leaves and found a Hanuman statue. He prostrated before the lord and then went back to his fort. In his dream that night, the lord came in his dream and asked him to build a temple in that place. The next day the king laid the foundation and the temple was constructed.

The temple has been under the control of the Kakatiya kings. They started adding smaller temples within the premises itself. The temples of Lord Rama, Vigneshwara, Nageshwara, Brahmaraba sametha Spatika Lingeshwara, Durga mata, Saraswati mata, Jagannatha Venugopala swamy, Navagrahas are situated. The Navagraha gods are considered to be responsible for the happenings in the world. Devotees consider the darshan of Goddess Durga as very auspicious as she is considered the mother of the Universe. Lord Anjaneya is known as Dhyana Anjaneya here. There is a pond in the temple where the devotees take a holy dip. They go around the Dhwaja Sthambam and offer their prayers. Then the devotees enter the Garbhalayam and offer their prayers to Dhyana anjaneya swamy. Then they pray to the other gods and goddesses in the temple.

Festivals like Ugadi, Sri Ramanavami, Valmiki Jayanthi, Krishnashtami, Hanuman Jayanthi, Dasara, Nagapanchami, Karthika Pournami, Sivarathri are celebrated with a lot of pomp and splendor in the temple. People have a lot of belief in the god here. It is said that if ladies worship dhyana anjaneya for 40 days regularly, they will be blessed with hale and healthy children. Similarly, people with diseases will also get cured if they worship the lord for 40 days.

Talking to the priest of the Saraswati mata alayam, he says that "Large number of devotees visit the temple every day. The place has its own significance and believe that dhyana anjaneya solves their problems. The other temples which are situated within the temple premises make the devotees happy as all gods are located in a single place."